The following is a paper I recently wrote for a class in Diversity as part of my graduate degree in Clinical Mental Health Counseling. The project was to experience a minority group in their environment and report on how the experience affected me. I chose the LGBT community and a local gay dance club/bar for my report. Enjoy.

No one told me 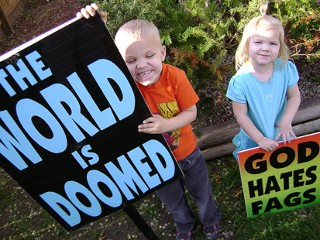 I was a straight man attempting to have a “minority experience” at a gay bar with my wife after dinner on a Friday night. No one told me that gay bars don’t get busy until after 11pm. Who knew? It was just after 9pm and there we were: my wife and I sitting alone in a massive dance club, music pumping, light show activated, $8 cover charge paid and completely alone. Not exactly the “gay experience” I was hoping for. With kids asleep at home and a babysitter ready to expire in an hour, we decided to hit the street and track down a good gay experience, freestyle. And it didn’t take long.

The area of town we were in is known for being somewhat of a gay district, replete with gay bars, coffeehouses, restaurants and you’re run-of-the-mill artsy shops and, of course, your band of weekend warrior street preachers with megaphones. The preachers were stationed across the street from a popular restaurant toting massive banners and literally yelling at the newly forming crowd through blaring megaphones the usual street preacher message of “repent or burn,” delivered in an extremely arrogant and condescending tone. The crowd was informed that not only gays and lesbians, but drinkers, masturbators and a host of other behaviors were sure to render eternal torments on deserving sinners.

My wife and I pulled up to some outside seating in front of the restaurant, ordered some drinks, and settled in for what was sure to be a showdown between the gay community and the street preachers. Indeed, there were some entertaining exchanges, but the entertainment lasted only a few minutes before I began to feel overwhelmed with a sense of disgust and embarrassment. Mind you, this was not the first time I had witnessed hateful street preaching, but, for reasons I will describe below, this occasion really affected me to my core.

This minority experience helped me to see Christianity through the eyes of the gay community in a way I have never known. Let me back up and set the stage. At the gay bar my wife and I interacted with only one person, our bartender. He was an incredibly nice guy: happy, cordial, professional, personable, everything you want in a great bartender. On our way to the club my wife and I expressed to each other our mutual anxiety of what was before us. We both seemed to fear that we would be rejected by the patrons and made to feel ridiculous for being an obvious straight couple in an obvious gay bar. But, by the time we left we felt perfectly at ease (thanks to the bartender), and as we walked down the street we were both sort of giddy and even more happy to be out on the town.

As we turned the corner and ran into the street preachers the mood of the evening took a sharp downturn. We were assaulted by shouts of hatred and condemnation trumpeted from megaphones in the name of Jesus. It is difficult to explain what happens to me internally when I witness this sort of thing, but I’ll try. I came to Christ as a young teenager in a wild charismatic church in Mesa, Arizona. For nearly 20 years I was faithful to the independent, Evangelical movement and believed that it was the closest thing to authentic Christianity around today. I even chased my aspirations of being a pastor by finishing my bachelors degree in Pastoral Ministry at Oral Roberts University—one of the foremost Evangelical universities in the world. I came to my end with the movement when I recognized its historical bankruptcy in relation to the ancient faith, its endless internal divisions, and a myriad of personal experiences which convinced me that the movement was a counterfeit; revelations which came to a head while completing my masters degree in theology at the same university. In its place I discovered the ancient Orthodox Christian Church and three years ago was baptized into its ranks and have never been more at peace and in love with God and His creation than I am today. That said, now when I am confronted with what I consider to be a great aberration from the authentic Christian faith, parading in the guise of Christianity, preaching a gospel of hate and ridicule, every ounce of my being turns immediately both sad and angry. It takes a lot for me to sit quietly and merely observe when everything in me wants to jump into the heat of the debate.

I Get it Now

A great contrast was formed in my mind between popular street-preaching Christianity and the gay community. I felt the insults as if I was the gay man the preachers were attacking. With the happy and accepting gay bartender still fresh on my thoughts the outright evil emanating from these preachers was made plain before me in a way I’ve never experienced. If I were a gay man out for the evening and experienced this scene it would only serve to convince me that Christians were blind, knuckle dragging hypocrites whose time in history had official come to an end; then I would have turned the corner and been on with my night more convinced of my own purity in contrast to the Pharisees with bullhorns than I was prior to witnessing them. I would not have stopped to engage them in debate for the simple reason that blinding hatred and hypocrisy is not cured by debate, but by the sort of life-revelation that neither I nor anyone could mediate for them.

This troubles me on many fronts. First, that many will never know authentic Christianity but will only ever have for their example these sorts of hateful, self-appointed deceivers posing as preachers. Second, that anyone claiming to know Christ could even entertain the idea that God would have them hit the streets and shout at “sinners” till the break of dawn. Third, that many in the gay community will use experiences like this in the manner described above—as fodder for unconditional rejection of Christianity.

I was not a Mere Observer

The rest of the story is that at one point in the evening one of the street evangelists approached me (probably because I was shouting “hypocrite” at the preachers from my chair at the restaurant) wanting to know if I knew Jesus as my personal Lord and Savior. He was a young guy, maybe 18, so I had a soft spot in my heart for him, knowing that he was probably raised in this fundamentalist group and would potentially find his way out of it someday. I stood up and talked with him for a while until an older gentleman stepped in (a pastor, I later learned). I think he was nervous because I had the kid in a theological arm-bar and his body language made it was obvious that he was out of apologetic resources. So, I spoke with the older guy for some time, but did not make any observable headway with him. The discussion was classic, but to give any details would elicit an entirely new paper to cover its finer points, so I digress. But, it was actually a lot of fun. I have not had the opportunity to unload my debate side on someone with that intensity for quite some time. Honestly, I could have gone all night.

18 thoughts on “Gay Bars and Megaphones”