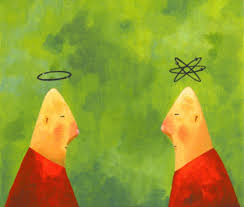 Why is science and religion so often pitted against each other as if the two are inherently at odds?

I’ve written on this before and have read mountains of material on the subject, but I’m still surprised every time I hear the charge that science and religion are in some sort of locked combat to the death. I wonder why some feel it necessary to create the clash since in reality there simply isn’t one.

I freely acknowledge that there are plenty of advocates on both sides of the fence that will never let the invention die, and, incidentally, they are typically the ones whom I find the most difficult to have civilized conversations with. I’m specifically thinking of Young Earth creationists (YEC) on the one side and the philosophical naturalists on the other (though I know there are plenty more in between). But for those with even the slightest open mind on this subject I’m hoping this articles helps.

I think the best way to dispel the myth is to highlight the reality of different modes of discourse inherent in any act of knowing.

This an extremely basic point to consider in any sort of analytic work. Different modes of discourse go with different issues. The scientific mode and the religious mode are different, yes, but not inherently at odds. It is a similar situation with, say, a legal and an ethical mode. Because something is legal does not necessarily mean it is ethical and vice versa. But one would have to be borderline deranged to believe that one of them must be mere fantasy simply because they do not present the same insight.

Charles Morris (scholar and innovator of differing types of discourse) made the obvious but profound point that a person is “ill served when one of them [discourse types] claims for itself an adequacy and importance which it does not possess.” For example, the scientific mode, which he labels Designative-Informative, deals with what is “confirmable (or disconfirmable) in terms of empirical evidence.” This mode is vital for the natural sciences, but silent on a host of other questions.

One often hears the claim (put in various ways) that if a thing cannot be confirmed by science then it is either ‘no-thing,’ (doesn’t exist) or is not to be taken too seriously. But if one is consistent with the charge then not only religion but ethics, morality, and a gang of other issues must be mocked.

“But,” the critic will argue, “religion claims the reality of a supernatural world whereas ethics and the like do not. Science deals with real things and if the supernatural is a real thing then it is within the scope of science to investigate.”

This of course is non-sense. The physical sciences have nothing to say about the supernatural—either to confirm or disconfirm (hence the term supra-natural). The best science can say is that there is no trace of said “supernatural” detected in the physical universe. To this the classical theist heartily agrees, indeed defends! It does not claim that the supernatural consists of “things” alongside all other things in the known universe. If religion has already claimed this then science is hardly putting religion to death by confirming its own tenets (granted, not all religions reflect classical theism, but you get the point).

It is important to note that the religious mode has a much broader scope of inquiry than the physical sciences. The scientist operating in the scientific mode is under no compulsion to bring together all the facts about the outside world and the values he holds inwardly into a single comprehensive system. When he does attempt something like this he is playing in the philosophical and/or religious mode.

And this is precisely the burden of the religious mode: it must account for everything and bring all things into a comprehensive framework—which opens itself up to endless criticism. Religion must account for the world of morals, ethics, meaning, emotion, and particular cosmological questions well outside the scope of science.

To know something scientifically requires most of all that the scientist treat the analytic process objectively, which demands that he objectively distance himself from what is being explored—his personal life must never get in the way of pure science.

To know something religiously requires a very different set up. Whatever is to be understood requires the believer to treat the process subjectively, which demands passionate personal involvement with what is being explored—his personal self must not be removed from the equation of the truth.

It’s the difference between running test cases with married couples to learn about marriage dynamics vs. being married.

It goes without saying that there is a marked difference between observing something from the outside versus from the inside. As Gordon Allport said, “To stand wholly outside the phenomenon is to understand it less well than by entering in.”

One would have to be ignorant on the level of insane to believe that the religious mode would ever render the sort of data necessary to run a combustion engine, power a computer, or find the cure for cancer; likewise one would be foolish to use the scientific mode to settle matters of good or evil, to deal with personal relationships, or find a cure for guilt.

But, again, these different modes are answering different questions; they are not in conflict. My advice to those who struggle to find the balance is to increase one’s own degree of awe and wonder of creation. All the differing modes have their special insights which work together for the person who is earnest in grasping what this life really is. Science offers a limited scope of certainty, but too often people play the fool by translating this into the possibility of building one’s life on certainty. Life is, from start to finish, a mystery of the grandest proportions. The person who is bent on excluding the religious or the scientific due to some personal ax to grind simply needs to grow up.

It was said that “Darwin at age 60 complained that he could no more enjoy Shakespeare, for he had too long disciplined his mind to conceive of reality as limited, verifiable, one-faceted” (Allport). I suppose this same deadening effect can take hold of anyone who limits themselves to any one mode of thinking.

The whole Young Earth creationist vs. evolution debacle is not lost on me. I understand that for the extreme literalist on both sides of the fence there seems to be irreconcilable differences between Biblical religion and science. I have not attempted to unravel this long and tiresome issue in this article not because it is impossible—it can be done in a few sentences—but because I do not want to give it more spotlight than it is worth. I admire the work of both the natural evolutionist and the intelligent design advocates, though I do not fall in either camp. My own opinions on the subject are not particularly unique and basically fall in line with the historic Church, which never found it necessary to hold a strict literalist interpretation of historic narratives in the Bible, nor to make the issue a matter of creedal significance. At any rate, please feel free to leave comments regarding this angle if you feel it necessary and/or if you have some unique perspective on the matter.

42 thoughts on “Science vs. Religion: the epic clash of a false dichotomy”