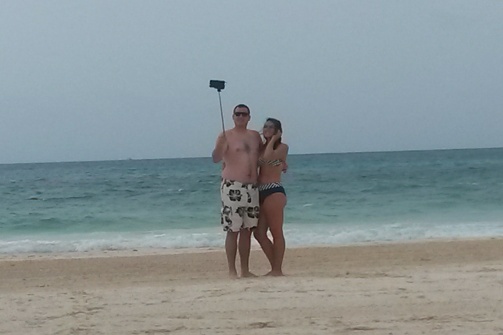 If being present in the moment requires that you relate yourself to the moment in earnestness then the very act of disconnecting from the relation in order to snap a photo of it leaves you outside the very moment you capture. It’s one of the great ironies of our time.

The photos we take of ourselves can never succeed in the task we often assign them. The precise image of ourselves and events produced by photos seem to lead us to believe that we can “seize” particular moments for time and eternity simply by capturing them on a medium (film or digital). But this “obligation” of the photo can never be realized because the image of an event can never become THE event. It is forever captured not as reality but as an image of reality. However precise the image may be it can never be more than a copy. Human beings cannot enter into relationship with a moment via a copy of the moment; such a relationship never rises above abstraction.

So, whether one views his selfie 5 years later or 5 seconds later, all he views is an image of himself outside the moment captured, so what’s the point? It seems to me better to have working memories of moments I truly lived, however few they be in the long-run, than to possess endless selfies of events with me in them without me actually being IN them.

The best thing to do (in my opinion, of course) is to have a friend take photos of you when you’re not expecting them. Then you have actual moments captured where you are present in the photos. Otherwise, take all the selfies you want for the sake of sharing them with friends and family, to help them form an accurate picture of you last amazing journey to a Starbucks or whatever, just try not to be hypnotized into thinking they are for you. If anything, they are a rebuke of you in that they are not you at all.

Due to feedback I’ve received on this article so far it is clear that much of the main point is being missed. Here is an excerpt I shared on Facebook in response to a few readers:

“The point is that when a person is truly in a moment one does not take a photo of themselves in it. Could you imagine you’re about to have your first kiss and just as the moment is about to happen you pull out your phone and snap a selfie?

The idea is ridiculous because we all understand that it captures a false moment. You have to pull yourself out of the relation to the moment in order to take the selfie, so, effectively, all you catch in the photo is not your first kiss but you “acting” your first kiss.

Pull it back and relate this to every selfie occasion and you’ll see that, to whatever extent, you leave the moment in order to “capture” it.

As far as photography in general, sure. If you are having photos taken of, say, your wedding, it is an occasion in which one has determined that this specific time will be for posing and capturing a moment that is a moment wittingly used for posing. No danger of ruining a real moment because nobody is under any delusion that it is a “real” moment which requires their relating themselves to it.”

6 thoughts on “The real reason why selfies are dumb”